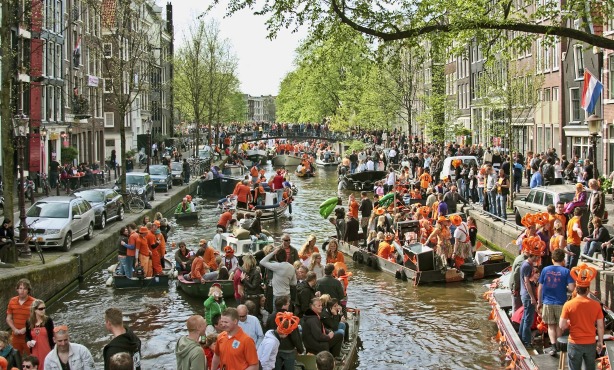 Dutch holidays you might not know too much about

Work hard and play hard is the Dutch lifestyle of choice. Lately, over years of finding myself in Groningen, at the behest of Dutch cultural norms there have been days where I found myself having an unexpected holiday. The Netherlands is wrought by long-lasting tradition, and, piling the usual Christmases, New Yearses, and Easterses, together with the cultural phenomena of national celebration makes for a haphazard holiday calendar.

It’s no use checking off a date and leaving it at that, and, frankly, it just seems like a cheap trade-off for actually appreciating why many Dutch holidays have stayed in people’s thoughts for so long. We internationals have, at our disposal, the ability to be memorable of what makes the traditional pillars of this country run like a well-oiled machine.

The venerated King Willem-Alexander’s birthday has come around full circle once again. At 53, the 7-year reigning king of the Netherlands’ birthday is a celebratory marvel – draped and cascaded in orange – signaling the country coming alive.

For every ascension since the 1890s, then Princess Wilhelmina’s birthday in late August and every ascended monarch’s natal day thereafter has been a cultural union of people and country. From Princess day, Queen’s day and, finally, King’s day, the intricacy of celebrating a physical, local symbol, rather than a past miracle has always been the height of why this day is so memorable.

This year, the Kingsland festival Groningen in Stadspark – the northern edition of the national strata of king’s jubilees – is announcing its ticket sales tomorrow, on the 6th of February. With the specific lineup coming up shortly, Kingsland has enticed us with 5 major electronic festivals to enjoy, inviting some of the biggest DJs in the world to perform on this unique holiday.

Every five years, the Dutch Liberation day happens to be an official national day of celebration. Sanctified as a fully national holiday in 1990, its 75th anniversary this year will partake in the five-year privilege of being a year of extra diligence and attention, and we have the highlight of experiencing it.

Relative to the mathematical in-frequency of the annually accepted day of liberation, it all began on the still stringent burden of the first half of the 20th century, when, in 1945, the occupied Netherlands was, you guessed it, liberated through an international effort on par with the Allies.

As such, Bevrijdingsdag is a proud celebration of not only keeping up national stride in the face of hardship but also maintaining a true human effort in countering injustices and proving that the world, however mismanaged and ruthless, has the tenacity of bringing truth to justice. Something we can all hope to see more of in the future.

It may be facetious of me when describing this most formal of occasions, but history proves that the Netherlands was the friends we made along the way. With parades of veterans and music festivals, it’s a day of sanctimonious reminiscence at the free spirit of freedom and unity veteran ancestors all around the world came out of just 75 years in the past.

There are as many renditions of this holiday as there are cultures in Europe. The Netherlands, as well as many other culturally parallel European settlements, have celebrated St. Maarten’s Day, in one way or another, since the 6th century.

To my surprise, even the country I hailed from, in the distant reaches of Northern Europe far to the east, and as many as 20 other countries celebrate a similar tradition for the sake of the Saint’s funeral. His acts and causes are too many to list in his ever-growing repertoire of saintly deeds – a roman soldier, friend to children and the poor – originating from France and whose acts of kindness spread like wildfire.

And you may be right since Old Halloween has always been attributed to this holiday, yet its transition to modern celebratory measures is convoluted, to say the least, and, as most European celebrations – highly contested with old pagan practices.

But as a premise, Sint Maarten’s is the end of the autumn wheat seeding and annual cattle ‘harvest’ season. Hallmarks for most of the Julian and Gregorian calendar. A day to celebrate the passage into winter.

And, by that logic, we can see the later additions of children going door-to-door for sweets, just like the poor farmers – Sint Maarten’s children – did when preparing for a long winter. Today, its arrival is heralded by markets and folk festivals.

I would be remiss not to look at the most haughtily represented Dutch holiday of the year – Sinterklaas. Saint Nicholas’ name day, a contested title of the saintly day of gift-giving. What makes this day so traditionally ‘north-western Europe’ is it being celebrated almost exclusively in Benelux and Northern France.

Coupled with a feast and usually celebrated as a family occasion, Sinterklaas eve, the day prior to the 6th, is made special with an evening of gift-giving and reciting poems.

Sinterklaas has a lot in common, and (I hope I’m not the first to tell you) has similar roots with Christmas. However, the real historical figure of Saint Nicholas was, in fact, Greek and not from the North pole, and brought gifts upon his arrival. Yet, for many, it’s the mystical figure of “the patron saint of children” that really makes the holiday special.

A later addition to the tradition, Zwarte Piet (Black Pete), was added as St. Nick’s helper/apprentice in the 19th century and has been a wildly speculated subject due to the character’s culturally inappropriate ethnic representation. Its addition at a time when racial tensions were extremely prevalent in Europe is not ideal but has nevertheless been considered an altruistic addition to the holiday spectacle.

For many ado, set up a calendar:

For day of the King –

Drink up and addle far

The country alive and sing.

For the 5th, the day that brings

The reminisce of history and things.

A liberation of the Dutch –

The country freed for all to praise and watch.

The Hallow evenings of the west,

Of season’s folk and feast.

When St. Maarten is laid to rest,

And Autumn ends with ease.

Brings gifts and joy: call me a fan;