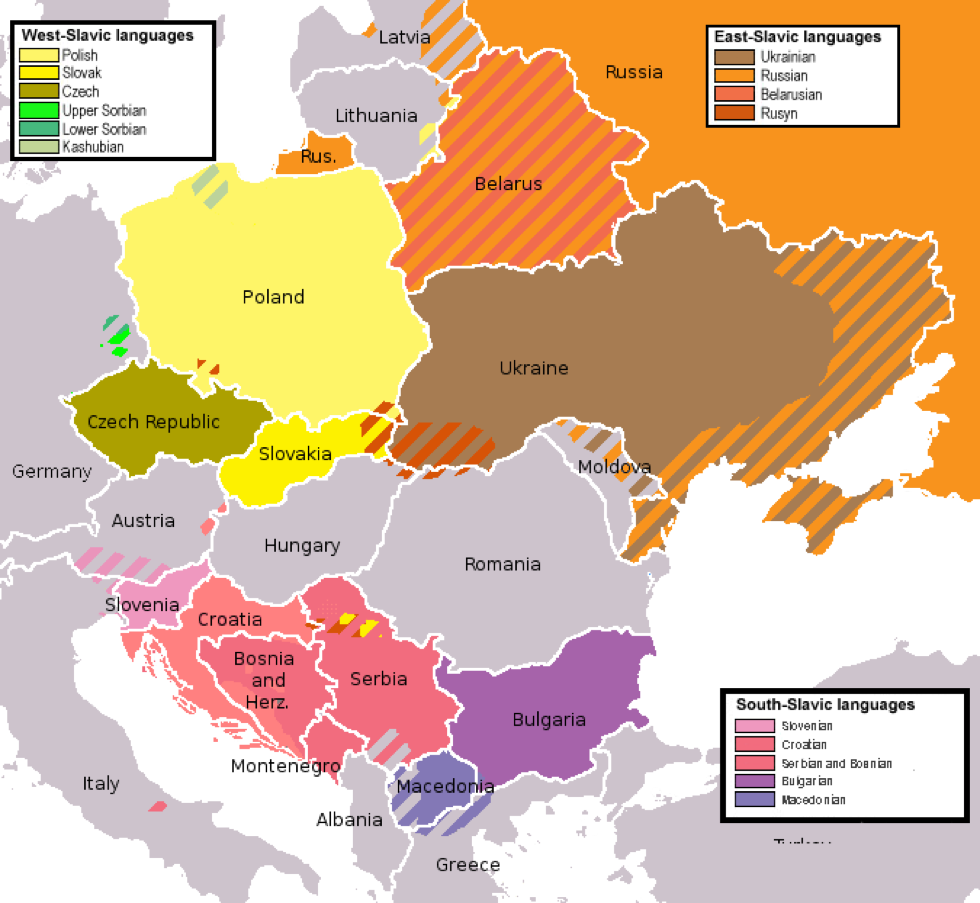 While lot of my Slovak friends insist they are not Eastern European (geographically Slovakia is part of Central Europe), lets be honest – anything east from Germany is in the minds of our western friends part of the former Soviet Union.

I asked my American friend what are the first things that pop into her mind when I say Eastern Europe and heres what I got: poor, vodka, crime, Melania, tracksuits, potatoes, cold..

1. Oh so you speak Russian right?

Poeple often assume that if you speak some Russian you will be able to hold a decent conversation anywhere in Eastern Europe. While it is true that Russian is one of the Slavic languages and quite a few words sound very familiar if not the same, holding Slovakian passport doesn’t entitle me to write down in my CV ‘fluency in Russian’, not even the very basics. If there are two languages that are really similar in Eastern Europe it is Slovak and Czech (I did write that one down shamelessly in my CV). After all we used to be the same country – and to my surprise I met more people that thought we still are. They say Slovak language was invented by Štúr when he was drunk and tried to translate Russian to Czech. You get the idea.

2. A shot of vodka a day keeps the doctor away.

Only when I moved to Netherlands I realized Slovaks do drink a lot. It is not even so much about HOW MUCH we drink, but more so about WHAT we drink. To be fair Slovak person would never catch up on the amount of beer a Dutchie is able to down during a night out. However, drinking strong liquor – vodka, slivovica, borovicka, you name it – preferably above 40%, is what we are good at. If you happen to have an Eastern European friend in Groningen, ask them for some Palenka (I am sure they brought some from back home and treat it as holy water). Most of my friends compared it quite accurately to the taste of a washing liquid, however I promise we do not have a shot of it each morning with breakfast, as some people think. Cheers! Or na zdravie?

3. We are cold and emotionless and our country too.

If you want to hit on an Eastern European girl at a bar I can give you a tip for an opening line: „Why do you look so angry?“  The exact same thing happened to me several times until I realized my resting face expression comes across to people as grumpy or annoyed. Generally, people from Eastern Europe are often characterized as being cold, emotionless or even rude. I promise we are none of the above, we just need to be reminded to smile more often. Maybe next time you see a grumpy girl at a bar, instead of asking her why she looks angry, use a pickup line that is gonna actually make her laugh.

This section is kindly dedicated to one of my friends that LOVES to make fun of me coming from Slovenia, sorry I mean Slovakia, and everything that it entails. Moving to Netherlands enabled me to see Slovakia in a bigger picture and made me realize we do have some strange traditions going on, especially around Easter. There is a custom celebrated during Easter which may seem rather cruel, misogynistic and not so much 21st century-like, for which I really cant find a nice way to explain: it is whipping women with willow branches on Easter Monday. And the best thing? Women have to reward men for whipping them and they usually give boys coloured eggs, or for older men shots of traditional alcohol. It is said that the whipping should ensure fertility and vitality (or so they say).

Keep an eye on our blog to find some other stereo types, maybe next time your country will be featured!