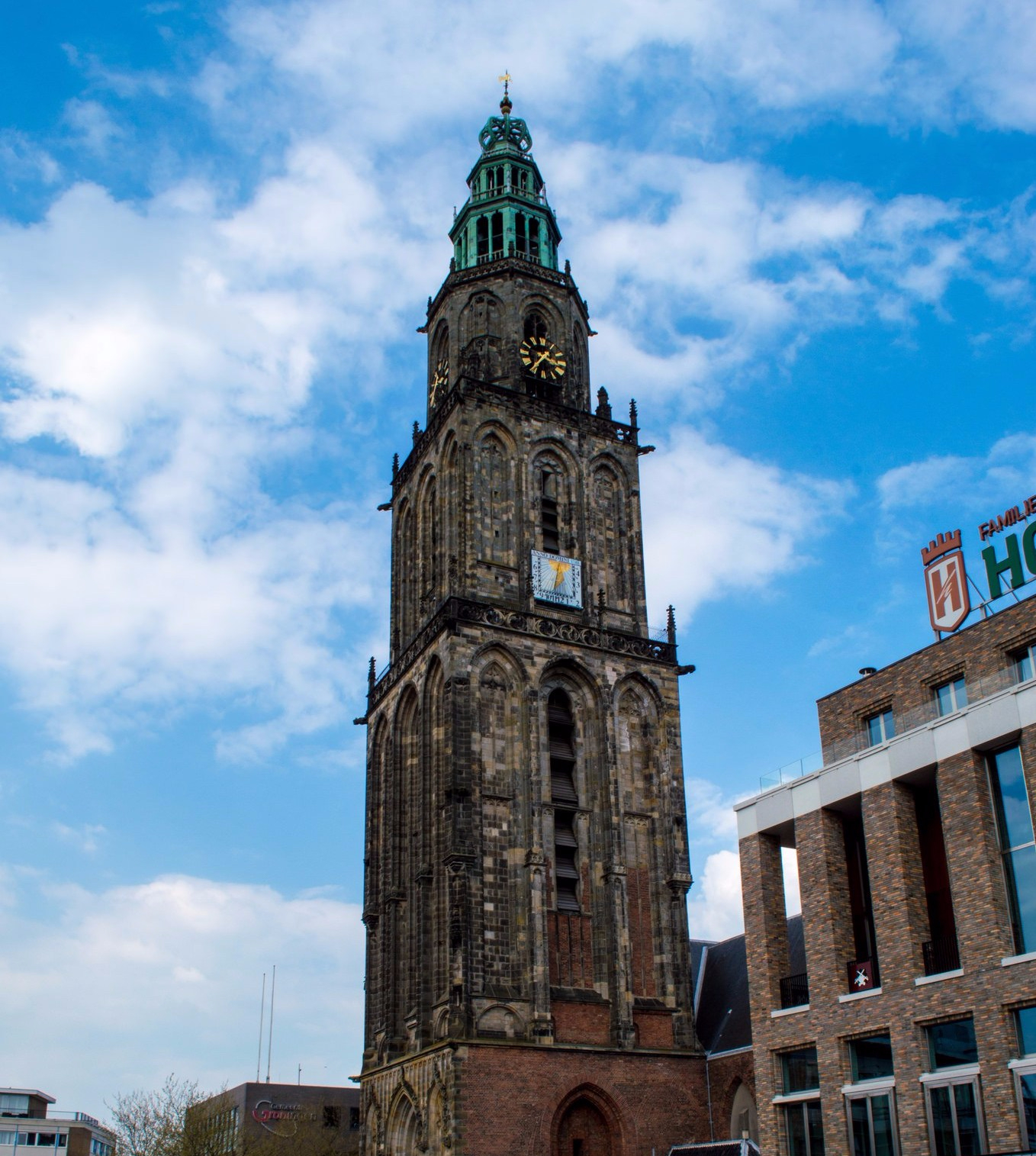 5 things you didn’t know about the Martinitoren

You might see it when you cycle to university, you might pass it when you’re going home after a night out and it might have even been the first things you noticed about Groningen’s skyline: the Martinitoren. It’s hard to imagine Groningen without the tower, but of course the tower hasn’t always been there. How much do you actually know about this tower that is often considered as the touristic highlight of Groningen? Let’s find out by discussing five facts of the Martinitoren!

Next to the great view of the Martinitoren from different parts of the city, it is also possible to enter and climb the steps of the 97 meter high tower. The Martinitoren consists of three levels, of which the first two are accessible by the public. Once you’re on the first level you could maybe already see your student home or university building. You can also try to find some buildings even further away, such as the soccer stadium Euroborg or the railway station!

You could even go a bit higher and after 251 steps in total you will have reached the second level of the tower. This is the highest you can go as a visitor, but if you dislike heights I can promise you this is already quite high up! This is also the level where the clocks are situated that you have probably used sometime during your stay in Groningen to check the time. There are four clocks in total and you can see the back of these immense structures from here.

2. Did you know… that you could ring a bell of the Martinitoren yourself?

If you decide to climb the Martinitoren, there are multiple stops on the way to the second level. One of those stops brings you to one of the many big bells of the Martinitoren and the best thing about this one is: you can try to ring it! We tried it out for you and as you can see, it’s quite an experience! It requires quite some jumping and pulling on the robe, but once you get a sound out of the bell it’s very satisfying!

3. Did you know.. that the Martinitoren has a bad relationship with thunderstorms?

The current Martinitoren is not the only tower that has stood on the north-eastern corner of the Grote Markt. In the 13th century there was already a tower on the Grote Markt, but it was hit by lightning and collapsed. A second tower was build, but again it could not withstand the forces of nature. In 1468, this second tower and the neighbouring buildings collapsed after this storm. Then in 1469 they started building a third tower, which is also the tower that is currently visible in the city center of Groningen. The third tower was originally 103 metres high, but again (take a guess!) lightning struck and the tower burnt down and only left 69 metres. After renovations the tower you see nowadays has been created, with a length of 97 metres.

4. Did you know.. that the Martinitoren leans a bit to the right?

5. Did you know… that there is a little horse on top of the Martinitoren?

Most church steeples you see in the Netherlands are topped with a rooster, but have a closer look at the Martinitoren. On top of this tower there is also a wind vane, but this time it is shaped as a horse! The reason for this is unknown, but it probably has to do with Saint Martin. This is the patron of the city of Groningen and he is often displayed on horses. And another little fact, the tower is also named after him!

Practical information for your visit

If this article got you interested for a visit to the tower, here is some practical information for your visit. A ticket only costs 3 euros in 2017, and with big groups it is possible to go in even cheaper. The Martinitoren is opened every day of the week. From Monday to Friday from 12.00-16.00, on Saturday from 11.00-17.00, and on Sunday from 12.00-16.00. For more information, please visit: https://toerisme.groningen.nl/en/about-groningen/map-of-groningen/companydetails/3147/martinitoren