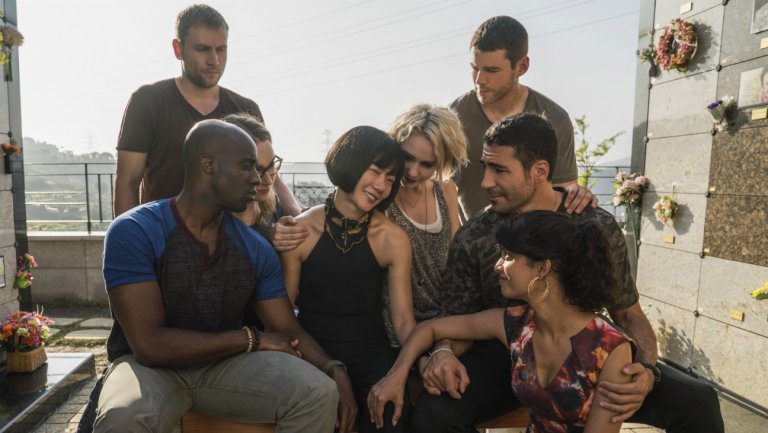 Let’s give in to a bit of quality entertainment. We seldom have time to catch up with tv-shows and new releases – to pull our noses out of textbooks and travel the world. And the 21st century way to do so? Straight from our beds and computer screens.

But this wouldn’t be an ESN blog without a little bit of cultural diversity! The world is full of tv-shows for all people, but it’s rare to see portrayals of anything else than Hollywood stereotypes. I’m sure you’re already familiar with some of these but looking back at the landmarks and cultural settings that might be alien to those only affected by pop-cultural media, I’m here to shed some light onto tv-shows with an intercultural background!

Right, so here’s a big one for you, although for some reason this million-dollar per-episode flick doesn’t get the justice it often deserves. Sense 8 was the love-child of Netflix’s most ambitious vision for the streaming service era. A global, well-funded, culturally diverse and, frankly, exceptionally human experience. It follows a cast of characters taking place in nine cities located in eight countries and introduces a sci-fi setting of 8 people intermittently linked by empathetic powers which give them a mental and emotional connection with their mutual protagonists. Phew, that was a hard one to explain. Really, in terms of interculturalism, Sense 8 went full out and provided representation on wholly global grounds.

Sense 8 was entirely too ambitious for its time but paved the way for what streaming really was capable of doing. It flew by with two exceptional seasons, and a follow-up cinematic series finale, leaving people bewildered at exactly what Netflix was bringing to the table. A shame it came and went, but for those of us who don’t really have time to fill in between a studious university life: it’s a good bite of quality and culture mixed with timely questions of identity, emotion, maturity – all in an international world we find ourselves in right now.

It’s not often you see a Netflix original that’s not originally English. This dystopian thriller drama is a fresh spin on ‘Hunger Games-esque’ dystopic questions about wealth and inequality, and their eventual fall into competition for survival. Set in Brazil and completely Portuguese, 3% is a culturally relevant milestone and shows that, wherever they might reside, the same questions often permeate through the creative minds of film-makers around the world.

3% sets itself in an unspecified future where the impoverished “Inlanders” get a single opportunity to face the tasks and tribulations of competing in “The Process” where they have one chance to live out the rest of their lives in a utopic “Offshore” society. The show’s namesake 3% describes the minimal chance that those who compete will succeed, and actually survive the task.

And with all of that, it’s no wonder that this drama has claimed a lot of praise for its quality and diverse representation, being renewed for its last 4th season in 2019.

Peaky Blinders put Birmingham on the map. The envisioned, and often only analytically described, times and emotional turmoil of the pre-war period of the 1920s is exceptionally portrayed in this gritty, western-inspired show about a crime family from the northern reaches of the UK. It sold people on its cinematic portrayal of minority groups all around Europe, and how their struggles to keep with an increasingly industrial world lead them to find ways of survival and recuperation.

Peaky Blinders is a dark show with a dark premise, and the portrayal is highly romanticized. Yet, for some reason, it doesn’t feel like the movie-like elements take away from the emotions that were so crucial in building up to the harrowing times that birthed out our culturally conscious world. With its 5th season playing out the show’s last hurrah in 2019, Peaky Blinders showed us that history, with all its injustices, crime, and traumatic elements, was, like all experiences, entirely constructed from the raw human drives that have since made what we now call the present.

The exceptional acting, accents and historical representation are really what sets this show apart.

To keep up with originally non-English shows, this highly dramatized crime heist thriller is a Spanish passion project of exceptional film-making suspense. The show follows an organized crime gang lead by “The Professor”, a meticulous criminal mastermind who intends to pull off the biggest heist in recorded history – to print millions of dollars in the Royal Mint of Spain. It shows a cast of eight recruits, all codenamed under different international capitals, and their tense fight to succeed and come out rich and unscathed.

Money Heist flew by the radar for many of us and I never really pictured I could love such a, for me, a foreign escapade in setting, language, and characters as I did when starting the first season. With three parts already out since then, the production of part 4 is well underway and continues with an increased budget and, most definitely, a lot of ambition put into it.

It just so happens that we all have a show that, while not exceptionally well acknowledged, has a big spot in our hearts. Personally, I think that that special something that really sells it for us can only be found if we explore the culturally rich and diverse film-making that looks upon the world with a slightly different, yet still immensely quality-made content.