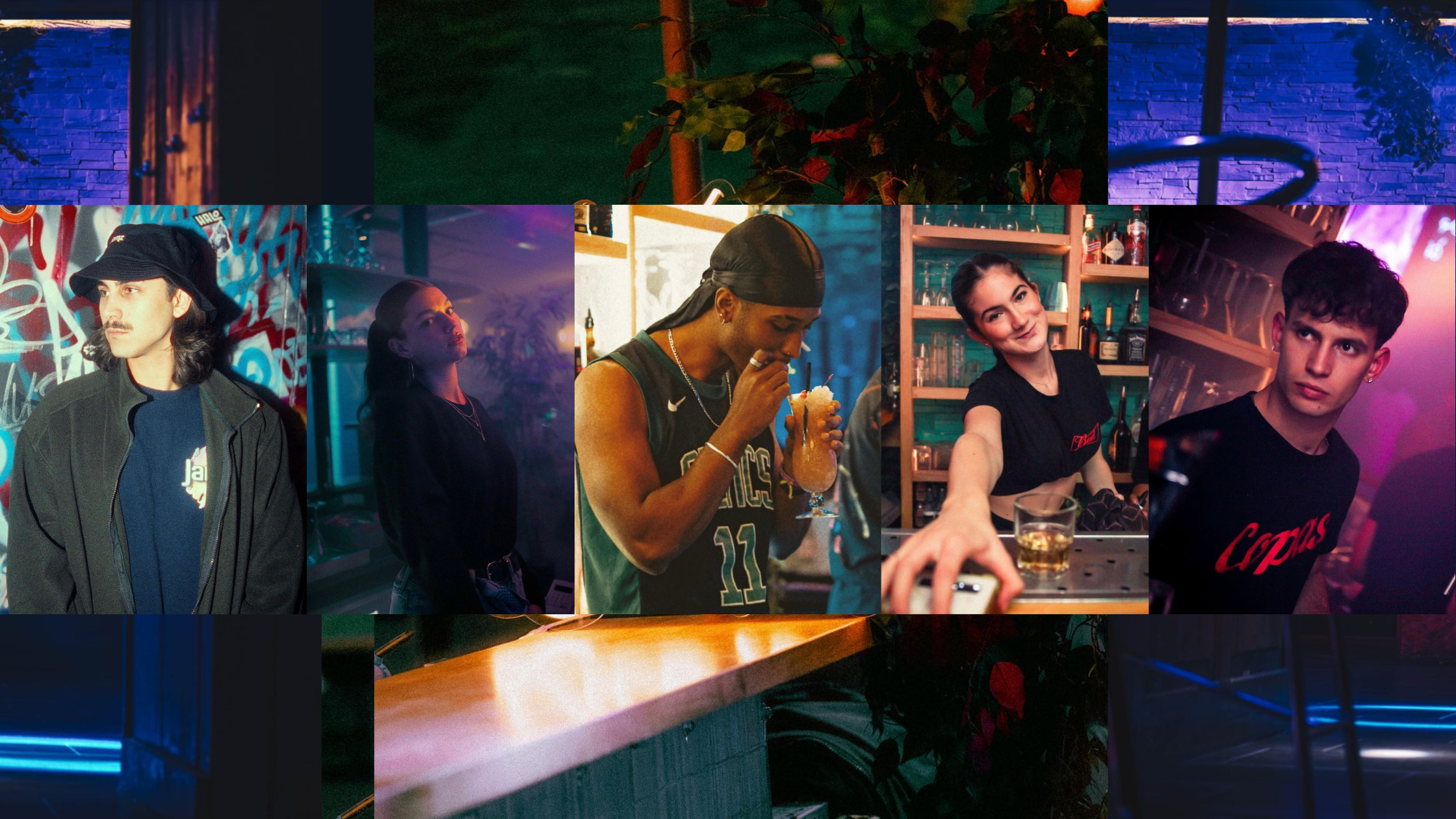 Nightlife From the Other Side of The Bar: Uncovering True Feelings of Student Bartenders

What are the chances that the person who pours your drink at your local club is a fellow student? For Groningen, the answer might be – “very likely.” Apart from its financial merit, having a part-time job(s) can also be perceived as a way to enrich interpersonal skills development while pursuing an academic career. Being a bartender is more than just getting paid whilst dissolving into the euphoric life; it is a job where you have to be the ‘chef’, server, busser, and cashier at the same time while maintaining your image as a role model in the club and acting out happiness. If it feels too absurd to resonate, imagine yourself having to do 50 push-ups while maintaining your smile and having to be socially conscious of your surroundings. To truly have a grip on how it actually feels like to experience Groningen from the other side of the bar, I have interviewed five Copas and Jamz bartenders to finally uncover some things that we should start thinking about.

Where Identity Clashes: Motives, Intersectionality, and Dehumanization
Without beating about the bush, nightlife has always been linked with numerous negative connotations to a certain extent. While many students go out at night primarily for their entertainment on their will, students who work as a bartender do not always feel the same way. Alona, a second-year law student at the UG, explicitly defines working as a bartender as a burnout job. Though the bartending job doesn’t require a lot of brain power and only lasts temporarily, having your life in a line actually poses a lot of mental coercion for putting elbow grease. The same goes for Tomasso as he states “[I am not working here] because I am a party animal, it’s a job, and I need this job for financial reasons.” Though he admits that living at night has its own pleasures that are very much enjoyable, he also confesses that it may cause you to feel profoundly guilty for not being a part of everyone else’s everyday world. Amongst many examples, being a bartender has brought a bartender to question their friendship with lots as they wonder “why do I only feel like I only have a lot of friends at night” as they hint at bartenders getting implicit expectation of free shots from their friends/acquaintances. Of course, “it hurts the friendship […] if they ever value it beyond this symbiotic relationship.” Another colleague then added: “do you even care if I am getting fired [for giving you free stuff]?” It is perhaps a job that makes you feel socially detached and accompanied at the same time.

The identity matters here, unfortunately, are not merely intertwined with the idea of the self and the night worker; but also weigh a lot on the subject of intersectionality. To clarify, intersectionality refers to the academic idea of the “interconnected nature of social categorizations such as race, class, and gender to a given individual or group, regarded as creating discrimination.” As uncomfortable as it is, racial discrimination has always been pertinent towards an ethnic group, and being a student at a prestigious university is no exception. Wander, a Dominican Republic bar manager at Copas, shared one of his worst and most hurtful experiences with a customer who assumes that he is a Janitor (instead of a student) when he mentioned that he is in a university just because he is Dominican. For what he truly is, “I am studying astronomy, I dream about being an astronaut, but for now, I am just working here to live on.” Much more than this, the feeling of desolation while noticing how a lot of students have the privilege to waste their money by going out regularly has also been influential for bartenders who work to fend for themselves. Ultimately, it conjures up loneliness and isolation as it makes it more difficult to feel understood for what you have been going through as your night surroundings have always been toned in euphoria. As he deeply reflects upon the life he currently sees, it also gives him aspiration to turn out well – materially and mentally – later in life for his future family and kids. Hence, perhaps we should question the statement that implies a nuance that nightlife is superficial. With the right set of eyes and mindset, you can create wisdom out of any ground; it is what makes your life whole. More fortunately, he also expresses his gratitude for how the Copas family really encourages him in his academic career, improving his language skills, as well as a phase to find himself.

Taken all together from inconvenient bearing, it boils down to one feeling that Elias, a new bartender at Jamz, called “dehumanizing.” That word might sound tough, but it is in fact stemming from a lot of ill-mannered attitudes bartenders have been dealing with: waving and throwing money at you, making inappropriate jokes, hair pulling, and many more. Furthermore, there has always been a profound issue of privacy, particularly in distinguishing between their job and personal life. Maybe it’s time for us to be aware of sayings as we put them on the subject. “I made out with a Copas bartender” (or gossip surrounding their private matters); they also possess complex conscious emotions and having things related to them does not make any difference with making any connection with another person.

In theory, there is nothing sexual about being a bartender – but here it is…
“I bet you get a lot of girls by working here.” Strangely, that assumption seems to be very innate, yet, it is hard to find a ground of justification where this logic comes from. Perhaps friendly flirting, for some people, is seen as a playful way to make connections with new people during the night. In fact, many have admitted that they don’t regret this action as much as it feeds as their ego boost. The question that naturally arises from this is: where is the line between flirting in a friendly way and when does it become borderline sexual harassment?

Perhaps many acknowledge that being friendly is a part of the job if you are working as a bartender; and most of the time, this happens when such actions are reciprocated. Don’t get them wrong, however, there is a defined line between flirting out of friendliness and actually taking interest in you. One female bartender hints that when she actually takes interest in someone, she will approach it beyond the bar as it shows that this is more beyond her professionality, symbolized by the ‘railing’ that separates the two. Another female bartender adds that when it comes to flirting, it truly lies on the depth of such interactions: she felt mostly infatuated with communications which put emphasis upon how she feels like “would you mind if I talk to you?” just like how you would flirt with other women in the club. In contrast, a guy bartender admits that “love life is made difficult with such nightlife” as to strike a balance between authenticity and part of the game can be extremely cunning.

Nevertheless, (sexual) harassment towards bartenders proves such statements – sexual nuances around the job – are somehow alive. A female bartender was asked to do a pole dance for some tip money, getting stared at for an uncomfortable duration of time. Several male bartenders were waited on by a girl, even an old man, after an invitation to their homes. Beyond what they faced for themselves, standing behind the bar gives you a better view upon the things that are happening. As Claudia expresses, “watching an unsober girl getting taken advantage of by a guy over the bar also affects me as much as I am the one who experiences it” while feeling extremely powerless– the line of consent can be blurry especially if the girl hints that she is fine with it by its limited cognitive function; hence creating a complex moral dilemma as a person as someone who works to serve drinks. Notwithstanding, it remains important to stress that harassment is not only targeted at a specific gender; it’s the mental problem of its perpetrator. Regrettably, many of these bartenders have accepted this harassment as a part of job risk as Alona added, “some people are just not worth explaining.”

Now you may wonder, why did you apply for this job in the first place then? Perhaps wrapped nicely by the words of Claudia, “I didn’t know I needed this job when I first worked here.” Less abstruse than it seems, working at night sometimes allows you to have deeper connections with colleagues whilst feeling more protected. Despite mental challenges that penetrate from the unsober surrounding, it is this place that brought them to their treasured ones: colleagues turn into meaningful best friends, partners, and family figures.

Written with love for everyone who did their best to live on,
Samara Jetta