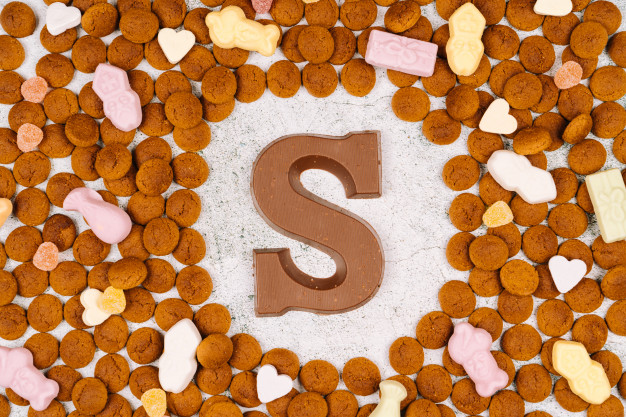 Every year on the 5th of December, Dutch people celebrate Sinterklaas. Sinterklaas is a very old man, sailing from Spain to the Netherlands on his steamship which is called ‘Pakjesboot 12’. The 5th of December is known as ‘pakjesavond’: presents-evening. That evening, everyone gets some presents from Sinterklaas and the Pieten (Petes).

We will take you through a speed course of the history of Sinterklaas so that you know where the celebration originated and why it’s such an important day for many Dutchies.

The bishop Nicolaas of Myra lived in the 4th century a.d. The story goes that the man worked miracles practically from the day he was born. He died on the 6th of December and was declared a holy man after his death. His date of death is now his name day. From the 13th century on, Nicolaas has been venerated in Western Europe.

In the first centuries of the celebration, rich people gave money to poor people. That later changed into the scattering of pepernoten and other sweets by the Pieten. The Pieten originated later than Sinterklaas, around 1850. They first appeared in a book written by Jan Schenkman. For years and years, the Pieten have been called Zwarte Piet (Black Pete). They wore black face paint, a black curly wig and special clothing, called a Pietenpak. Since the 1960’s, the first protests against this form of blackface began to take place. Ever since, people have been protesting the racist stereotype. In recent years, more and more cities have decided to ban Zwarte Piet and only welcome Roetveegpieten (Soot Sweep Petes) during the arrival of Sinterklaas.

Another really nice part about Sinterklaas (and one of the author’s personal favourites, still watching at 21 years old) is the Sinterklaasjournaal. This is a short journal in the weeks leading up to pakjesavond. It starts a week before the arrival of Sinterklaas in the Netherlands, which takes place around the midst of November. It is presented bij Dieuwertje Blok and shows how Sinterklaas and the Pieten are sailing to the Netherlands and what happens during their time in the Netherlands. Sinterklaas and the Pieten encounter problems that will prevent them from arriving on time or that will ruin pakjesavond (like presents disappearing, not knowing where to sail to exactly or losing the ring by which Sinterklaas can enter houses to put presents in children’s shoes). But of course, every year they fix the problems just in time to save the celebration.

Sinterklaas is not only an important celebration for children who still believe he’s real (and do not know the so-called ‘secret of Sinterklaas’) but many adults still like to celebrate it. They often do this by lootjes trekken (pulling straws). They write everyone’s names on pieces of paper and each pick one without knowing who’s name is on it. This way they each have a name of someone they will buy presents for. Often they will write a poem that goes with the present, or they call their inner child and get creative. They make a craftwork around a present that either is really nice and suits the person it is for, or is really nasty and makes the receiver find their presents in the middle of something gross (e.g. a box filled with straw, peanut butter and syrup). At the end of the evening, they tell each other which name was on their straw so that everybody knows who gave what to whom.

And of course, last but not least, don’t forget about the special candy associated with Sinterklaas. The best known candy are kruidnoten (also called pepernoten, but actually those are different) but other kinds of Sinterklaas candy are chocolate letters, marzipan figures and chocolate coins.