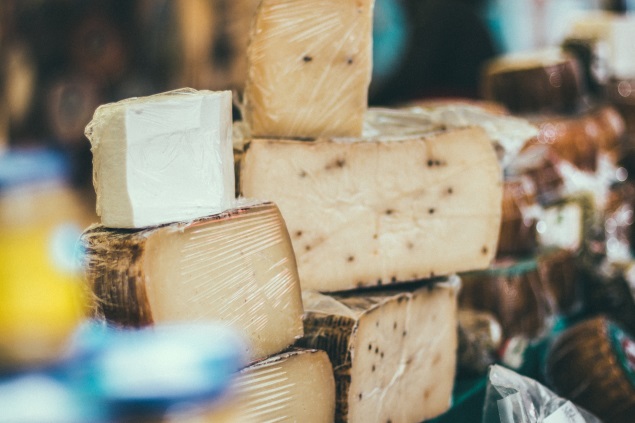 The 5 most typical Dutch foods

Welcome all the foodies to this quick and simple guide to Dutch cuisine! As a new international student, you should get immersed into the Dutch culture as much as possible, what better way to do it then through food!

Cheese is in everything, most dishes, on pasta or in a toasty, it’s delicious. The Dutch have been making delicious cheeses since 400 A.D.!!! I know, too long. Of course, then that makes the Dutch the largest exporters of cheese in the world, turning over 7 billion euro annually. Definitely visit one of the cheese shops in Groningen.

Now time for a very traditional dish – herring with chopped raw onions and pickles. The national dish, you either love it or hate it. Dutch consume 12 million kilograms of the hearing per year, which is at least 5 fish per person. If you’re new in Groningen, definitely go down to the Vismarkt and try it, it might end up becoming your favorite snack! 😉

Time to talk pancakes…. I mean poffertjes (don’t try pronouncing that one). You need to try those, sprinkled with powdered sugar, much softer than the traditional pancakes batter. Although surprisingly not originally from the Netherlands but from France, they have become one of the iconic foods of the Dutch.

The Dutch liquorice- only difference from the traditional liquorice is these are salty because of the ammonium chloride giving the salty almost “tongue numbing“ taste. Next time you’re in Jumbo, definitely grab Dutch liquorice, you can even use them to make alcoholic drinks, chocolate or ice cream…

Last but not least: croquettes from a vending machine. You can find all the Dutch fried specials, hamburgers, kroketten and frinkandellen and many others. Some snacks are great, especially when coming back after a night out! You even appreciate the cheap kroketten. It may not be Michelin Star worthy but for sure worth a try !

Make sure to give these traditional foods a go, you might end up loving them! If not then at least you will feel like a true Dutch citizen. Enjoy your culinary adventures!